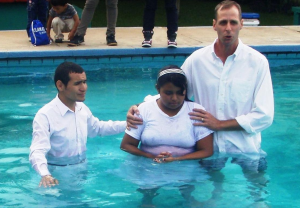 It is nothing for School to be canceled for one reason or another. No water, volcanic ash, teacher strike, demonstrations in the street, or the swine flue. This year there was a different reason school ended early in the community of Renacimiento. A gang from outside the community threatened to enter the school and take one of the children (for what reason we don’t know). The rival gang from inside the neighborhood showed up and prevented that from happening. A few shots were fired but no one was hurt. The event shook everyone up and the principle closed school for the final week.

The gangs are a sad reality in these communities. They demand store owners and residences to pay a protection tax. They fight over territory they can control. The incident last week was a fight over territory and it didn’t matter to them if it affected the school. At one of the schools where we work the teachers are extorted for the protection tax. Imagine what goes through the mind of these kids as they see these gang-bangers having power over their teachers. We thank God for the hope in Jesus Christ that has the power to keep these kids from being lured into the gangs.

Two children that are on the path to saying no to the gangs are the two we baptized Sunday. One of these is named Diana. Diana now 14 has been one of my students since 2nd grade. In the past months She has grown in her faith in Christ. She began working in the AWANA club and has become one of my most faithful leaders. So it was with much pride that I had the privilege to personally baptize her. Rejoice with us over the life of Diana and that in an ugly part of the city like Zone 18, Jesus Saves.

This entry was posted in Zellners. Bookmark the permalink.