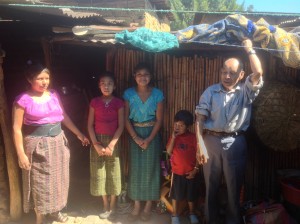 On Jan 27, 2014 Servants 4 Him will start its first Buy One/Build One house construction project. The house will be built for a family in San Pablo la Laguna, Solola, Guatemala. Meet the family below.

This is family of 11 who lives in small house constructed of adobe and cane (dried corn stalks). The man has been a widower for many years and lives with his family; sadly it is a very poor family. None of the grandchildren are in school and they work in the fields. They work coffee fincas (farms) and earn Q40/day ($5.00) for the entire family. 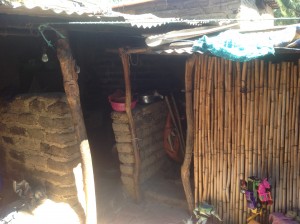 Demolition of their current house will start on Monday (the 27th). The family is very happy; the Lord is blessing this family with a much better home.

Posted in B1B1, Buy One-Build One | Comments Off on First B1B1 House Project 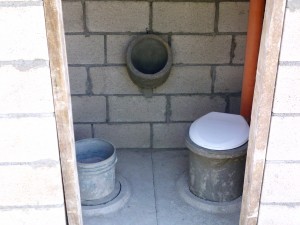 Servants 4 Him hopes to complete the Mercy House project in Totonicapan in 2013.

In preparation for our teams we have constructed a dry composting latrine.  One side of the latrine is used until it is full; when this happens the commode is moved to the other side and the full side is capped and left to compost for a year.   The compost can be used as a safe fertilizer in corn and bean fields. 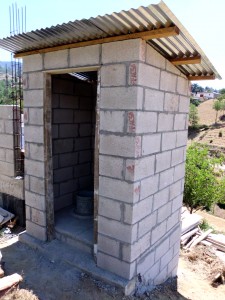 The work on this latrine was completed the first week of April 2013.   Since its completion Juan has been asked by family members and others in the community of Quiacquix what it costs to build this type of latrine.    These families have pit latrines that smell horrible and when abandoned for a new latrine site leave the ground soft and unusable for years.   Juan’s uncle told me he has had numerous latrine sites over the years.

Just like our bio-sand water filters it only takes one latrine to generate interest.   Our pray is that these latrines will open more doors for us to share the gospel and make disciples in Quiacquix and the surrounding villages. 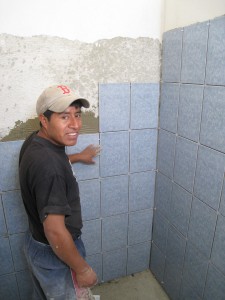 In 2012 the first floor of Mercy House was built with space for a shower. This is a luxury the majority of the homes in Quiacquix do not have. Juan called me a couple of weeks ago to ask me how we wanted to finish the walls and floor of the shower stall.   When we were told it was about $100 in materials to use tile Juan was instructed to use tile.   This week (April 19) this photo was taken as Juan was busy working installing tile on the walls.

This will be a huge blessing for our teams staying and working at Mercy House.   But, it will be even a bigger blessing for Juan and his family.

Forrest has stayed in other homes in Quiacquix in the past.  Bathing is done standing in front of a pila (outside general purpose concrete sink) and usually ice cold water.   If warm water it to be used it first has to be heated over a wood fire.   The Mercy House shower will also have an electric shower head which heats (warms) the water.

Widows and others who Mercy House serves will also be blessed by having a shower to use.

Thank you to all who have donated toward this project and provide regular prayer and financial support to Servants 4 Him and to Juan and Celestina.

Posted in Aguilars, Discipleship and Equipping, Mercy House | Comments Off on Prepared for 2013 Mission Teams

Willing to Die? The Danger of Being Safe

The danger of being safe

The list of these kinds of questions is endless.   And they all revolve around being comfortable and safe in living out our faith.

David Platt, during one of the sessions of the 2013 Verge conference said this about being safe:

Click here to listen to the short audio segment.

Posted in Uncategorized | Comments Off on Willing to Die? The Danger of Being Safe 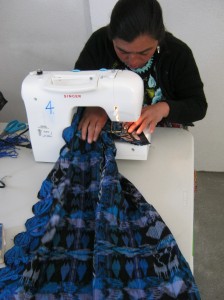 A few weeks before our August 2012 mission team arrived construction on Mercy House began.   Mercy House is a project started by Juan and Celestina Aguilar.   Their desire was for a place to do various ministries including:

Most of the first floor construction was completed in 2012.   The bathroom (shower stall, toilet stall, and pila (sink) area still need to be completed.    The second floor which we pray will be completed in 2013 will be a large training room and classroom.   And of course we still have no electricity – we have to run an extension chord from Juan’s father’s house.

However, even with a partially completed structure Juan and Celestina started using the space for sewing training, Bible studies, meetings, etc.

Now for the update …

Meeting with Mothers of Kids in Bible Study

On Dec 27, 2012 Vidal Bautista (the guy who made the doors and windows) and Forrest went to Quiacquix to install the doors and widows in the first-floor rooms of Mercy House.   When we arrived Juan and Celestina had a group of women meeting in one of the rooms discussing the details of a children’s Bible study they start in a few weeks.   They will teach two groups of kids on Saturday mornings and afternoons.

The first part of December we were provided funding to have the power company install an electric meter for Mercy House and to construct the doors and windows.   We immediately started the work to do both of these.  (Thank to all of you who support S4H’s missionaries and projects!)

When we have the meter Juan will have 220V service to his house which will give us the capability to use a heavy duty welder there.